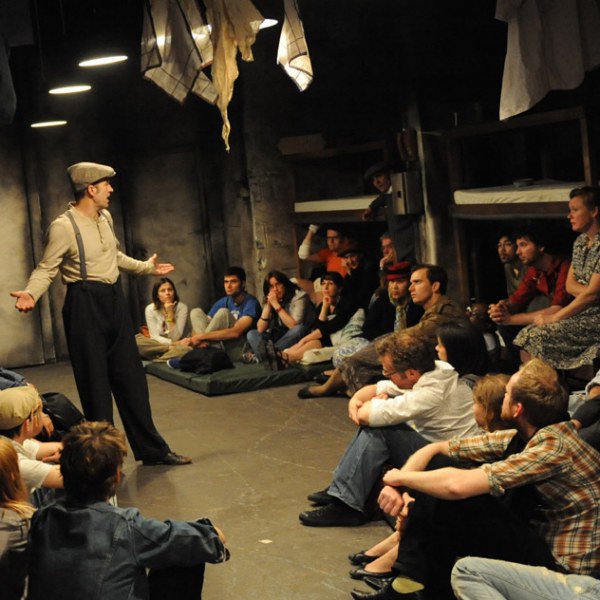 ‘This is theatre – the art of looking at ourselves’ Augusto Boal As part of a Forum Theatre project, ‘Rehearsing Change’, which South Tipperary Arts Centre is planning for autumn 2018, we have invited Terry O’Leary, Associate Artist with Cardboard Citizens and one of the most experienced Forum Theatre facilitators in the world, to lead a three-day workshop in the techniques and practice of this unique, socially-engaged theatrical form. Our project is rooted in the belief that theatre can be an active medium for understanding ourselves and others. Forum Theatre is a theatrical game in which a problem is shown in an unsolved form (the ‘model’ which can be a full-length play), to which the audience, as spect-actors, is invited to suggest and enact solutions. The proceedings are presided over by a figure called the ‘joker’ whose function is to ensure the smooth running of the game and teach the audience the rules. The resulting solutions form a pooling of knowledge, tactics and experience, being what creator Augusto Boal called, ‘a rehearsal for reality’. This ‘Theatre of the Oppressed’ draws on Paolo Friere’s Pedagogy of the Oppressed, by making the audience co-creators with the actors. A high level of skill and knowledge in the techniques of this theatrical form for the actors, the director and the joker are key elements to successful Forum Theatre practice and this 3-day workshop will give participants an excellent toolkit for working in Forum Theatre. Cardboard Citizens is an award-winning theatre company and one of the world’s leading practitioners of Forum Theatre. They have toured extensively for more than 25 years, bringing theatre to the most marginalised in society. Through bold and immersive theatre, Cardboard Citizens break down conventional divisions between audiences and performers. Past productions include the critically acclaimed Cathy, Home Truths at The Bunker, the Evening Standard Award-winning Mincemeat, Pericles and Timon Of Athens (with RSC) The Beggar’s Opera (with ENO), The Lower Depths and A Few Man Fridays. An actor, director and ‘joker’, Terry O’Leary is a regular guest lecturer at the Central School of Speech and Drama, Warwick University and Southampton University, and an experienced Theatre of the Oppressed consultant and facilitator– she worked with Formaat Theatre in Rotterdam and has also trained theatre practitioners in Australia, Czech Republic and Norway. As Adrian Jackson, founder of Cardboard Citizens and close collaborator of Augusto Boal, said: ‘Theatre is a form of knowledge; it should and can also be a means of transforming society. Theatre can help us build our future, rather than just waiting for it.’