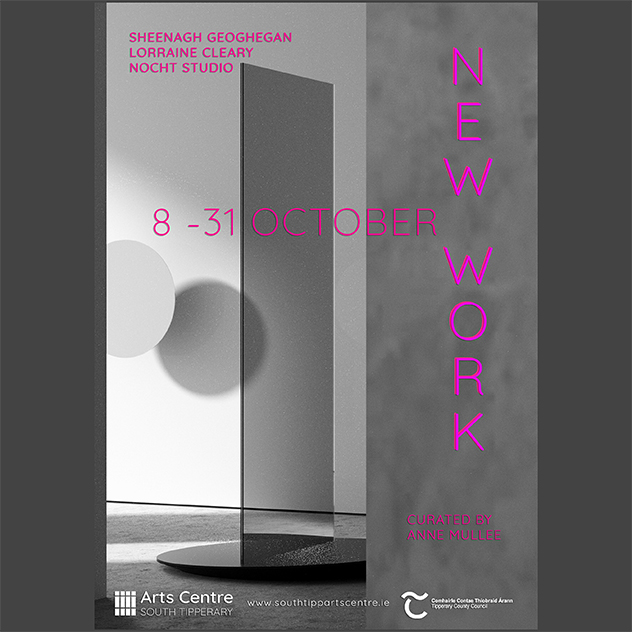 New Work presents painting, installation and text made by three Tipperary-based artists selected as part of South Tipperary Arts Centre’s Curator-in-Residence programme 2020. Independent Curator Anne Mullee mentored the artists to produce new work, initiating a series of meetings and professional development workshops which began in February. The programme quickly had to adapt to the online world as the Covid-19 crisis emerged. Inevitably the resulting work is not unscathed by events of this year, with issues including loneliness, depression, injustice and indecision addressed in particular by Sheenagh Geoghegan in her series of figurative drawings and collages. Confronting fear, anxiety and uncertainty through her work is central to Geoghegan’s practice, issues which she also grapples with through the newly conceived experiemental ‘correspondence’ text that will be available digitally via the Arts Centre’s website. https://www.southtippartscentre.ie/uploadedfiles/correspondences.pdf - Full text available here - correspondences.pdf Explorations of injustice also thread through Lorraine Cleary’s bold installation. Here ideas around trauma in domestic spaces and ‘residue’ left behind are teased out through the use of layered textiles hand sewn together to form an enormous, suffocating garment made from used women’s clothing. Peeking from beneath are domestic accoutrements including an ironing board, chair and a mug with the cynical motto ‘I’d rather be…Ironing’, painted in a charming baby pink, a signature colour of Cleary’s alluding to feminine strength in the face of repression. Nocht’s contribution to New Work consists of three conceptual studies, presented as interactive installations, of the ongoing series Narcissus. Offering a series of devices for engaging – or not – with the self, the pair use beautifully crafted objects to reflect or repel the viewer’s attempts to see themselves. Narcissus II, a large two-way mirror in a darkened space, disrupts the viewers ability to properly see themselves through manipulation of the available light. Conversely, Narcissus III, a kind of Gabriel’s Horn, pivots away from those attempting to look into mouth. In an era of hyper awareness of our own image, the futile attempt to ‘see’ ourselves renews our questioning of the notion of the self. https://www.southtippartscentre.ie/uploadedfiles/Nocht-Studio.pdf - Ideas - Nocht Studio.pdf Curator’s Note: This mentoring programme began earlier this year, before the arrival of Covid-19 upended our daily lives and decimated the arts in Ireland. Originally, our exhibition was to take place in April. That changed. To say that the pandemic created a challenging environment for the artists taking part in the programme is an understatement. After initial face-to-face meetings, our contact had to be conducted via Zoom or on the phone, while some of the artists could not access their studios or even meet to work together, as in the case of Nocht Studio, the collaborative practice of Philip Ryan and Martin McGloin. That all of the programme artists have carried on throughout the past seven months to make new work is an indictment of the resilience and tenacity often present in the artist’s toolkit, qualities that are frequently undervalued yet all the more evident as the crisis continues. My sincere thanks to Lorraine, Sheenagh, Phil and Martin for their commitment to and patience with this process, and congratulations to all on making new work in a time of crisis. Anne Mullee September 2020 Biographies Nocht is the emerging collaborative practice of Martin McGloin and Philip Ryan, working in the medium of made objects and interactive experiences. Both McGloin and Ryan also work as architects, and established Nocht in order to explore the concept of the self and other through percieved human experience in the digital and phyical world. Nocht work in multimedia including installaton, light, sound, musc and film, and are interested in interrogating the juncture of contemporary and traditional craft in Ireland. www.nocht.studio Tipperary-born Lorraine Cleary works primarily with sculptural installations, often creating mini environments centered around the domestic landscape. She holds a First Class Honours Masters Degree in Interactive Media from the University of Limerick (2015) and First Class Honours Bachelors Degree in Fine Art (Sculpture Combined Media) from Limerick School of Art Design (2014). A part-time tutor with the Learning Support Unit in Limerick School of Art Design, Cleary is also a volunteer with Adapt House women's refuge. She has exhibited widely around Ireland with recent exhibitions including Rural Shame at Custom House Gallery, Westport, Co. Mayo (2020) and the group exhibition Fuzzy Logic at Studio 12 Cork as part of the Backwater Artists collaboration with 126 Gallery (2020). http://lorraineclearystudio.com/ Sheenagh Geoghegan is a gratuate of the Slade School of Fine Art (MFA, 2013) and the Crawford School of Art (BFA, 2003). Working primarily as a painter, her practice has recently expanded to include text and sound. Now based in rural Tipperary, Geoghegan has exhibited in the UK, USA and Ireland, and has participated in residencies in Belgium and the USA. She is a receipient of numerous awards incuding the Charles Heath Hayward Award and the Slade Orpen Award (2012), as well as commissions for new work including Two days past and the skies changed 73 times on her noticing (PS2, Belfast, 2016) and Stoma at The Source Arts Centre, Thurles, Co Tipperary (2016).