A lushly scored retelling of Victor Hugo’s epic story of love, acceptance and what it means to be a hero.

A lushly scored retelling of Victor Hugo’s epic story of love, acceptance and what it means to be a hero. 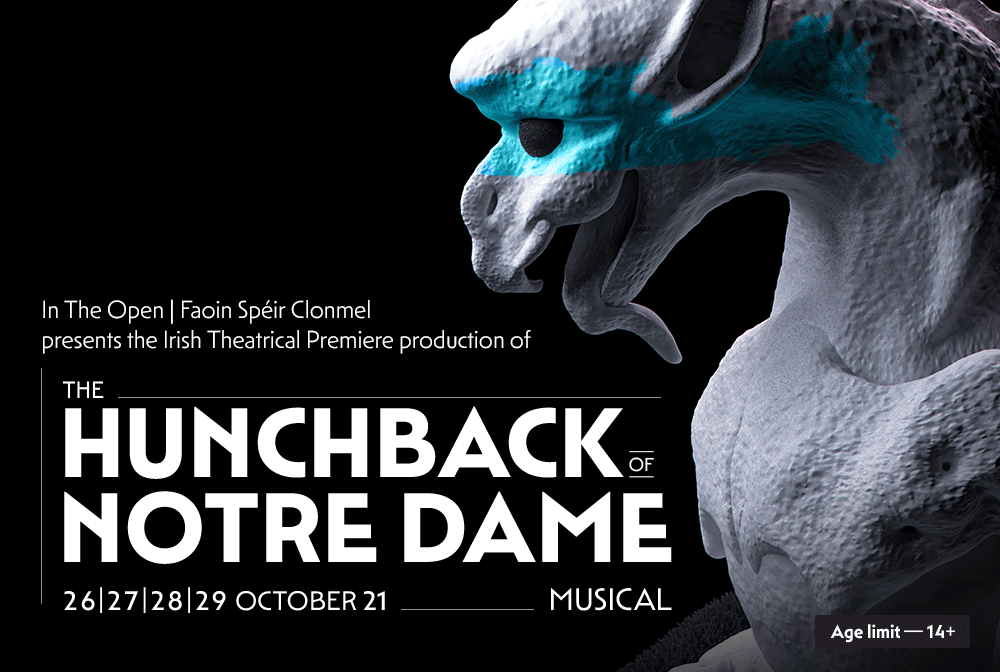 Clonmel Junction Arts Festival produces a lushly scored retelling of Victor Hugo’s epic story of love, acceptance and what it means to be a hero. Professional creative and production teams join forces with over 100 local performers to celebrate theatrical creativity with audiences in an outdoor setting at the parade grounds of Kickham Barracks in the heart of Clonmel. In the first of Clonmel’s In The Open | Faoin Spéir projects, The Hunchback of Notre Dame brings spectacle and drama back with a bang in an outdoor Irish theatrical premiere of the award-winning musical by Alan Menken (Little Shop of Horrors, Aladdin) and Stephen Schwartz (Wicked, Godspell) based on the novel by Victor Hugo (Les Misérables).

Based on the Victor Hugo novel with songs from the Disney animated feature, The Hunchback of Notre Dame showcases an Academy Award-nominated score, with Peter Parnell’s book embracing story theatre and featuring verbatim passages from Victor Hugo’s gothic novel.

Director Jack Reardon, with Musical Director Kate Twohig, Choreographer Ciara Laste and Set/Costume Designer Jack Scullion present this darker, more adult, and highly theatrical version, inspired by and incorporating original text from the novel and expanding the Disney film’s award-winning score. Exploring themes like faith, power, discrimination, isolation, and sacrifice, The Hunchback of Notre Dame has a powerful message of acceptance that will reverberate with audiences. Its rich and multifaceted layers – including complex depictions of disability, women, and the Roma, who represent all who are different to society’s norms.

The musical begins as the ‘Bells of Notre Dame’ sound through the famed cathedral in sixteenth-century Paris. Quasimodo, the deformed bell-ringer who longs to be 'Out There', observes all of Paris revelling in the Feast of Fools. Held captive by his devious caretaker, the archdeacon Dom Claude Frollo, he escapes for the day and joins the boisterous crowd, only to be treated cruelly by all but the beautiful Romani woman, Esmeralda. Quasimodo isn’t the only one captivated by her free spirit, though – the handsome Captain Phoebus and Frollo are equally enthralled. As the three vie for her attention, Frollo embarks on a mission to destroy Esmerelda and the Roma with 'Hellfire' – and Quasimodo must find the hero within.

Tickets can be purchased from the office here at STAC - box office open 10-5, Monday to Saturday

This project is funded by In the Open | Faoin Spéir - an Arts Council funded programme developed in response to the COVID-19 crisis for 2021 which will see a variety of outdoor arts events taking place in public spaces around Ireland. Co-funded and led by Tipperary County Council
PDF Download

Join our mailing list
Sign up to receive email updates in events, exhibitions & classes/workshops.
Sign up complete! Thank you!
Oops! Something went wrong while submitting the form.
We use MailChimp as our email marketing platform. Read our Privacy Policy here.