Time over Distance over Time

An interactive dance, film and digital technology installation, accessible for all ages. 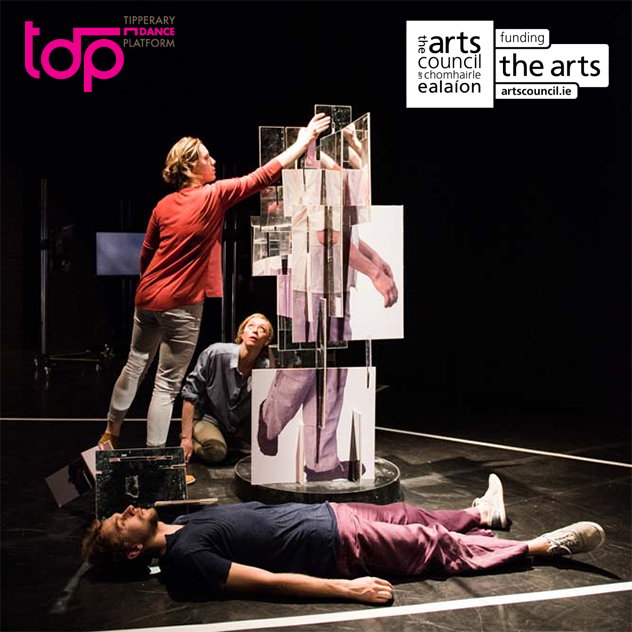 Time over Distance over Time

An interactive dance, film and digital technology installation, accessible for all ages.

Evidence of a piece that happened Time over Distance over Time Liz Roche Company (IE) Special project with MA in Contemporary Dance, at the Irish World Academy of Music and Dance, University of Limerick This installation is funded by the Arts Council. South Tipperary Arts Centre acknowledges the financial support of the Arts Council in making this event possible. Choreography: Liz Roche Film: Luca Truffarelli Interactive Visual Design: Jared Donovan Music Composition: Ray Harman Set Elements: Paul O’Mahony Course Director MA Contemporary Dance: Jenny Roche Performance: The students from the MA Dance An interactive dance, film and digital technology installation, accessible for all ages. Re-imagined from the dance piece Time Over Distance Over Time, which was created with a cast and creative team living between Australia and Ireland, this installation presents elements of the original work and the ways in which it was made. Performed by the students of the MA in MA in Contemporary Dance Performance at the Irish World Academy of Music and Dance, University of Limerick, the work captures experiences of emigration and the sense of fragmentation it causes as the full physicality of a loved one is often reduced to a voice down the phone or image on a screen. Co-produced with Queensland University of Technology, Time Over Distance Over Time was originally presented by Liz Roche Company at Dublin Dance Festival in 2016. The piece went on to perform at FORM Dance Project's Dance Bites Festival Sydney and Brisbane Powerhouse, with support from Culture Ireland's I Am Ireland Centenary Programme 2016. Time Over Distance Over Time was re-imagined as an interactive installation when Live Collision Festival invited the company to present elements of the piece and the process involved in making a work of this nature for their 2016 festival as part of the Project 50 celebration programme. Liz Roche working with collaborating artists, videographer Luca Truffarelli, interactive visual designer Jared Donovan, composer Ray Harman and dancers Justine Cooper, Kevin Coquelard and Sarah Ryan presented these re-imagined elements over three hours in Project Arts Centre's Space Upstairs, inviting the audience to experience and participate in the work as it is now; abstracted from its original version while exploring the new meanings that this abstraction creates. https://www.lizrochecompany.com/ - Liz Roche Company Liz Roche Company has been presenting evocative and compelling contemporary dance on Irish and International stages for over 15 years. Unanimously appreciated for its physicality, poetic strength and the cleverness of its intuitive collaborations with other art-forms, the company has become a leading light in the development of contemporary dance in Ireland. In 2015 the company premiered Bastard Amber, a co-production between the Abbey Theatre and Dublin Dance Festival. It was a historic moment for dance in Ireland, the first time ever for an Irish choreographer to be commissioned to create a full length dance work for the main stage of Ireland’s National Theatre. Supported by the Arts Council and also by Culture Ireland, the company has also performed at the Baryshnikov Arts Centre and Judson Memorial Church, New York, The South Bank Centre London, LEAP Festival Liverpool, DanceBase Edinburgh, Le Centre Culturel Irlandais and The Irish Arts Festival Beijing. In previous years the company has also performed in Germany, France, Cyprus, China and the UK and in 2016 toured to Brisbane Powerhouse and Dance Bites Festival Sydney, Australia. INSTALLATION-PERFORMANCE South Tipperary Arts Centre Free of charge | Festival opening reception Tue 9th Oct.